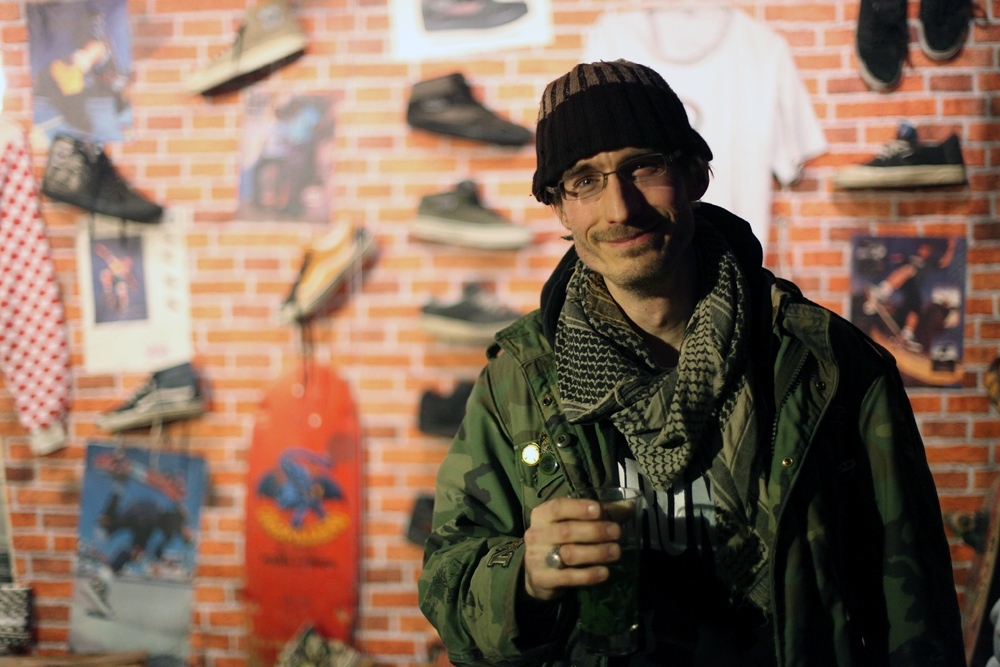 Juergen Blumlein at House of Vans, via vans-otw

Skateboarding was always cool – and now we know it for sure. It was officially confirmed by Jürgen Blümlein, who is just the right person to talk to, when it comes to the history of the discipline. Jürgen is a founding member of the FauxAmi collective, which places skateboarding within the context of art and culture. The collective opened the Skateboard Museum in Stuttgart in 2003, which (as you will see) was only natural and consequential – but the museum is currently venue-less, and will hopefully be transferred to Berlin any time soon. And last, but definitely not least, Jürgen is a skateboarder himself – he has been “on board and off the wall“, ever since 1987. Our colleague Ana Bambić Kostov had an opportunity to talk to Jürgen, and to ask him everything on the matter – how did it all start, for him, and in general? Why is skateboarding so cool? How does skateboarding influence art, and vice versa? Jürgen gave quite comprehensive and unexpectedly interesting answers to all of these questions, which gradually transfigured into amazing life stories. One of the most amusing is the story of the time when he and his co-amie Daniel met Harry Blitzstein, an inspiring artist from LA, who will be showcasing his works – made on skateboards – at OPEN WALLS gallery this June. 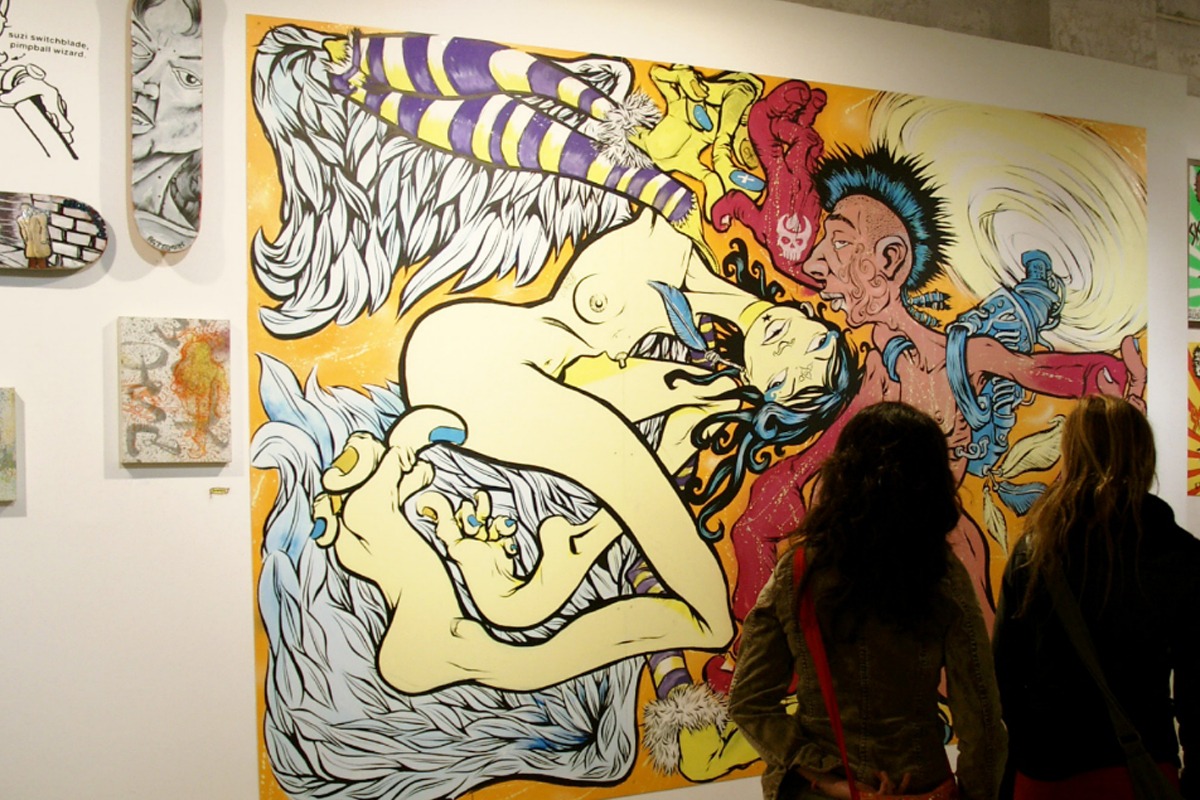 So how did it all start? Ana asked Jürgen about the history of skateboarding, but the answer wasn’t so simple: “If you look into the history, you have to look farther, as in, who invented the bike, who invented the roller skates, etc. Life kind of started with the wheel. The thought about moving differently than just by walking starts with the Vikings – they used whale bones to make ice skates, and ice skates were the precedent of the roller skates.” Apparently, we do not know the name of the man who invented a roller-skate prototype, but Jürgen told us a story about the origin: “In the Netherlands, in the winter time, they used Grachten (the canals) as streets, because the water was frozen and the ships could not travel through frozen water, so they used their ice skates to travel from A to B. An unknown inventor (we don’t know the name) thought: How can I do that same thing during summer, on the streets? And so he came up with an idea to use spindle wheels, wooden wheels attached to his shoes. Of course this was not very close to perfect technology, so it was not very successful“. But, the legend remains. However the person who put a patent on the first roller skate was Jean-Joseph Merlin, the Belgian music maker who worked in the UK at the time. The King and the Queen were fascinated by the story and they invited him to a party, to which he came in a memorable way – on his roller skates, forgetting (or deliberately choosing not) to use his breaks, smashing into a mirror and breaking it into pieces. So it seems like moving on wheels was a bit of an outspoken, in-your-face thing, from the very beginning. But what about skateboarding, per se? “A lot of people think that the American surfers made it happen, but the first ever known footage of people playing with the skateboard was shot in the ‘40s in Berlin, Germany. It’s hard to imagine the way they shot it, though. And it was Martha Goebbels, the wife of the propaganda minister,  in the garden, playing with her kids with skateboards which were made out of wood – wooden plate and wooden wheel. They had a ramp and they went down that ramp… You can easily find it on Youtube, you just have to google it ‘the Nazi have invented skateboarding’. You will find it – very interesting footage.”

But just like the roller skate, as we know it today, was ultimately appropriated and re-shaped by the Americans, it so happened with skateboards as well. “The Americans surfers brought it to the broader audience – when the tide was low, they looked for something they could do on the beach, so they came up with the skateboard as we know it today. The first skateboards you could buy in a store came in the late 50s. And that was the first movement – millions of Americans had skateboards, and were skating around. So, it was the first wave. But it went down, due to the many injuries, although this was ultimately a problem caused by the bad choice of material. So, when they found better wheels in the seventies, it popped up again; then went down again; then up… So it is a permanent wave.” And we can surely sense the reality of that permanent wave. We can compare the way our parents regard skateboarding, to the way we think about it today, just like Jürgen did: “My kids, they have a skateboard, I like to see them on a skateboard – which is different to my personal story, my parents didn’t like skateboarding. For them, it was antisocial. It was something the neighbors didn’t like, my parents didn’t like – ‘It’s loud’, they said, ‘you are destroying your shoes, it is all bad..” 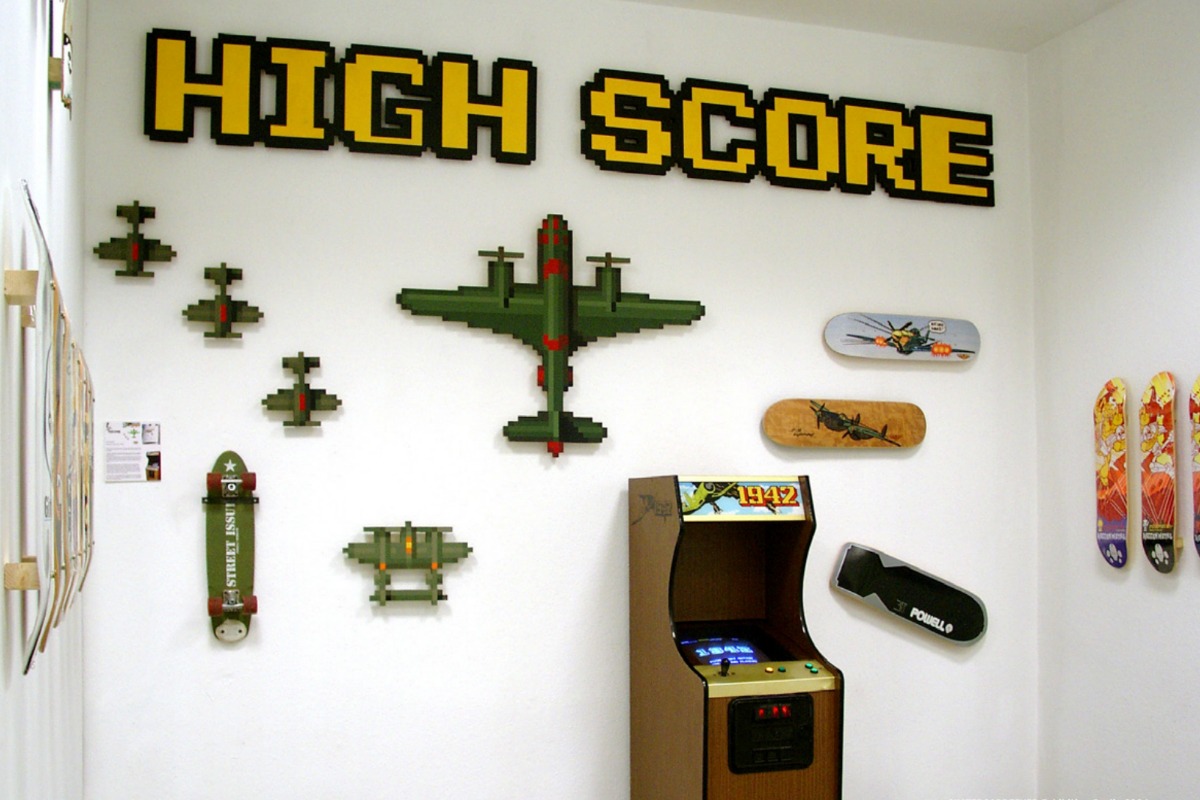 But how did it start for Jürgen, and the Skateboard Museum in particular? His studies were related to art, design, and film, but they have only partially influenced his future career of an art curator. All the other credits go to his love for skateboarding, which he has been nurturing since his teenage days. Working as an artist, Jürgen had his first solo show in 2002, but he could not reach a point of agreement with his curator, who couldn’t understand Jürgen’s wish to exhibit his skateboards alongside his art. “I create artists, and not people hanging skateboards to express themselves” was what Jürgen was told, and although he was fine with it at that time, the idea to overlap skateboarding and art didn’t leave his mind. Obviously, he wasn’t the only one who had this kind of idea, and eventually FauxAmi was born. “We became our own curators, presenting our own art. The whole thing was – why not host an exhibition about skateboard culture? So we did. I think it was the second art show I did, then curated by us, four amies – real friends.” So, even though the name of the crew takes on the name of Faux Ami (fake friend – which Jürgen says was not a metaphor for the former curator, since he was supposedly a great guy), the crew consists of true friends with genuine love for the art of skateboarding.

“Although the idea was born early on, the hardest part, at that point, was finding a space for it, a gallery. That was very interesting – you already have a hard time being an artist and finding a gallery that exhibits you, but running around and telling people that you want to exhibit skateboards and skateboards culture was … well, they looked at you like: What? There is no sense in doing it“, says Jürgen. Ultimately, they got lucky – they found a guy from the city, in the backstage of a rock concert in Stuttgart, who was looking plain conservative but turned out to be open for the idea. “He said: Oh, we have the basement of that building; and I liked the idea because skateboarding was kind of underground, too. It was all planned to be a 2-week exhibition – a 2-week period to get the best out of it. We worked half a year to produce everything – we invited a director from New York, we had movie nights, screening documentaries… We brought in a lot of good people, some art, some graphics, some DJs. People really liked it” 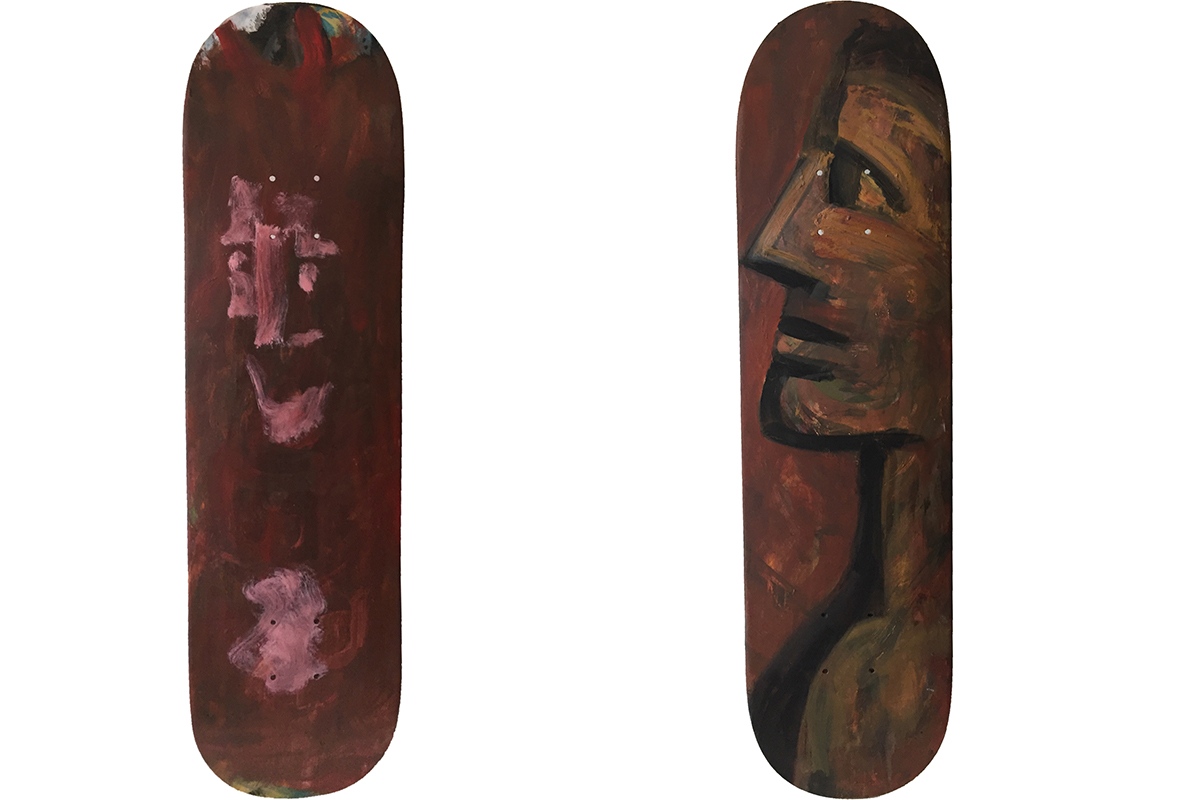 And just like that, two weeks turned into nine years. From late 2003 (when it all started) all through 2012, the Skateboard Museum was running in Stuttgart, the supposedly “conservative” city, kind of an opposite to Berlin. Jürgen says that he doesn’t see himself as a collector – he is an archiver. He archives everything that he finds interesting, and that involves a lot of different things related to the subculture of skateboarding. Perhaps not all of it will be exhibited in the museum, but most of it gets out in public at some point – they have various collections. Even though this is not the only museum of this kind in the world (there are 3 more in the USA, one of which is very unfriendly to non-skaters), it is the only one in Europe, and made spontaneously, with love, from ground up. However, in 2012, the museum was shut down – but not because of poor interest of course. It was closed because of some completely improbable reasons – the building was about to get taken down by the bank that had rented the building to the city earlier, after the 10-year-long rental period was over. But the museum – in its virtual, mobile, ideological form – still exists. And, it will be relocated to Berlin – although the venue is still unknown. “We’re still looking for it. We had two options, but Berlin is tough on that. I don’t known if you know the building of Stattbad –  that was our first hope, and we worked really hard on it, with architects, and money-raising, looking into everything. We wanted to use the entire first floor, but in the end, the same thing happened – the whole building was shut down, and I think that in the end they are going to take it down. So, we all had to leave.” 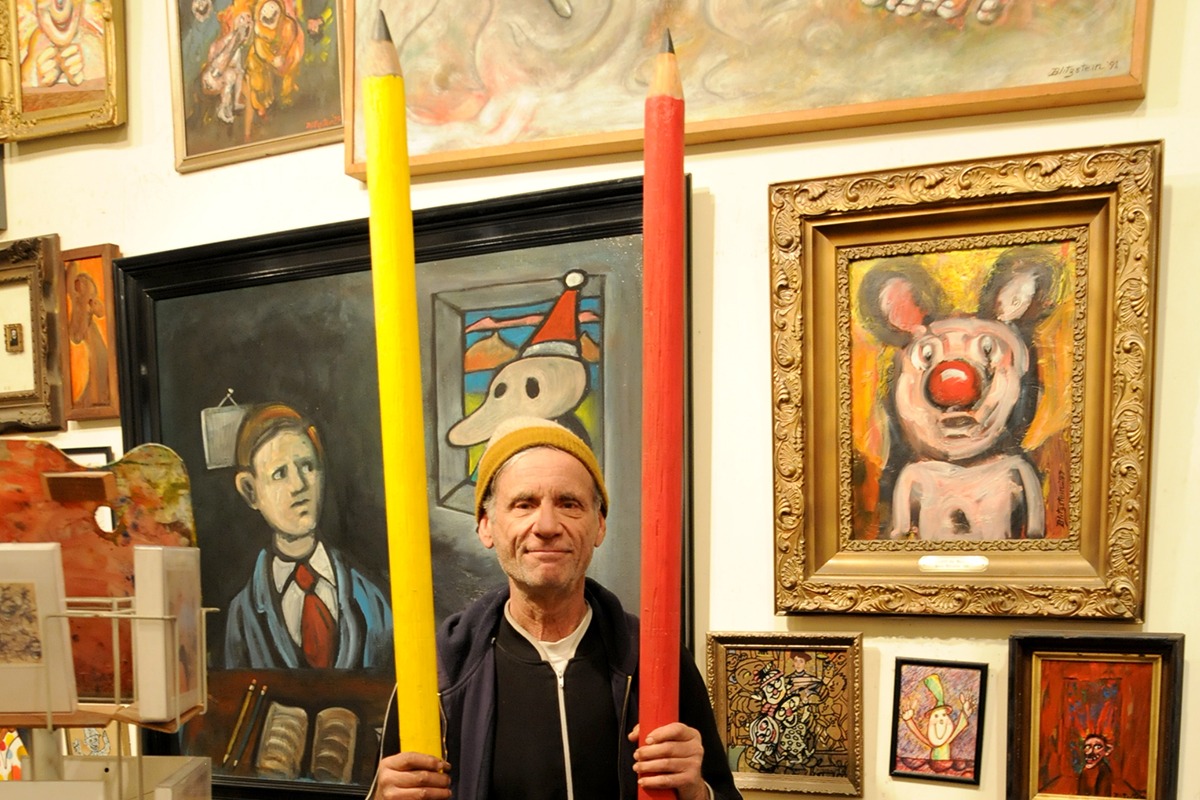 In the Meantime – Harry Blitzstein at Open Walls

The museum still hasn’t found its home, but that doesn’t stop the crew from curating and organizing exhibitions, and spreading the word on the culture of skateboarding. At the end of this June (the 29th, to be exact), there will be an exhibition hosted by the OPEN WALLS gallery in Berlin, and it will feature the works of an extraordinary artist from LA, Harry Blitzstein. Jürgen tells us about how they met: “We had a book tour in the US, and we had a shop where we could do the book signing,  at the Fairfax Street. We just got there, went out the store for coffee, and ten minutes later, we were in front of this interesting shop display, with the weird, really weird artworks. We just stepped in and there was this really friendly old guy sitting in there. Every piece of the wall and the ceiling – everything was full of art“. As you already assume, the “friendly old guy” was Harry Blitzstein, an American painter who used to be a street artist himself, but got busted, and went through a lot of trouble. However, the experience has influenced the way he works and the way his art became loved by various subcultures related to the street. It is probably one of the reasons why Jürgen loves his art so much, and why, ultimately, OPEN WALLS gallery was thrilled to do the show with someone who is not as young as the artists they usually represent. “His art speaks to you in a way that is friendly. It’s very… I don’t wanna say childish, but it feels like you are a kid again“. Daniel (also from FauxAmi) and Jürgen loved his art so much, that he was the first person they took seriously at a time when their interest was based on skateboarding exclusively. They gave him the idea to paint one of his artworks on a skateboard, and this following exhibition will present works – 50 of them – which reflect on this fruitful idea. In the end, one simple thing that Jürgen said explained how he feels about his art better than a thousand words: “I am not a collector, and I do own works from several artists. But, I have to say, I collect Harry Blitzstein“.