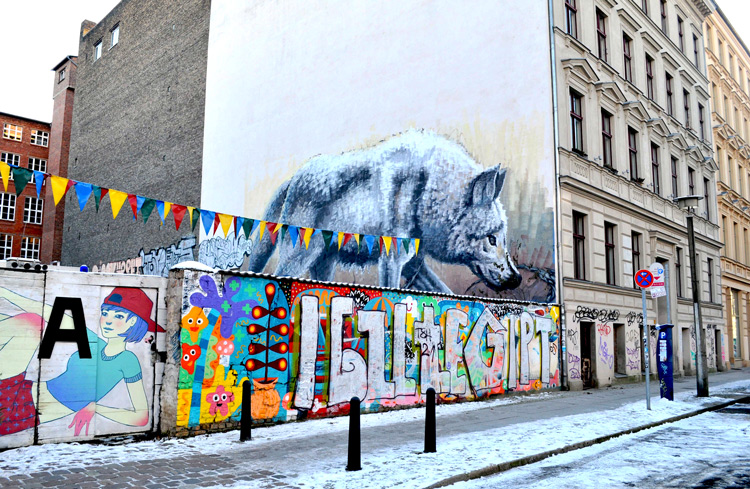 It is often said that the history of graffiti is as old as the history of humanity itself. Scribbles on the walls were the first form of artistic expression, the first evidence of human creativity, which survived in its various forms until the present day. Nonetheless, it wasn’t until the 20th century that wall inscriptions became a cultural phenomenon in their own right. The beginnings of modern day graffiti are often traced back to late 1970s New York, a city that gave birth to a lively new movement originating from various subcultural backgrounds. However, it is important to note the difference between contemporary street art and graffiti at the very beginning. They can be both described as nontraditional forms of artistic and cultural expression that share territorial affiliation, using public spaces as their media of choice. Street art and graffiti originated as a way of expressing discontents and creating awareness of socio-political issues on a local, communal level, ultimately becoming an essential part of the global visual culture. Even though these two disciplines are inextricably linked, the history of street art is a story that goes beyond aerosol graffiti and can’t be explored without a wider local context in mind. 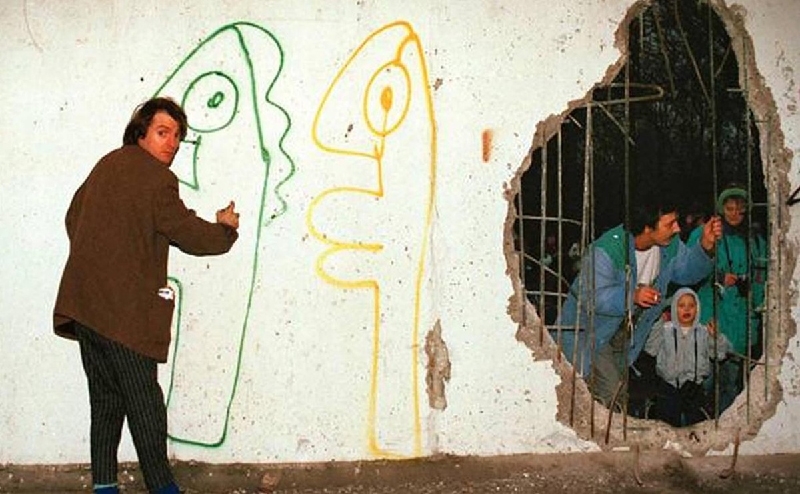 Thierry Noir painting on the Berlin Wall. Image via The Guardian

The term street art gained popularity during the graffiti boom in the late 1970s and 1980s, which is one of the main reasons why many experts connect the beginnings of the movement to the United States. Although, graffiti had an essential role in making of the modern street art history the evolution of street art is more complex than it seems. Street art, as the most versatile global art movement of today, owes its glory to the intersection of numerous local forms of public expressions, born in different parts of the world.

The art of stenciling, poster art, and wheat pasting, now some of the most common and popular street art techniques, developed from European revolutionary politics and were used by those in power to communicate political propaganda, as well as those who resisted, spreading the opposite ideas. In Mexico, South America, and Latino neighborhoods in the US, sociopolitical messaging gained shape of the large-scale public murals, drawing from the rich artistic heritage and centuries-long tradition of mural painting. All those techniques and styles that gave birth to global street art culture were born in relation to local socio-political contexts, exploring the complex ides of identity in relation to public spaces. The socio-political setting is an inevitable reference when it comes to understanding street art in its local context, and it is the idea that had to be introduced before we move to our story – the evolution of street art scene in Berlin. 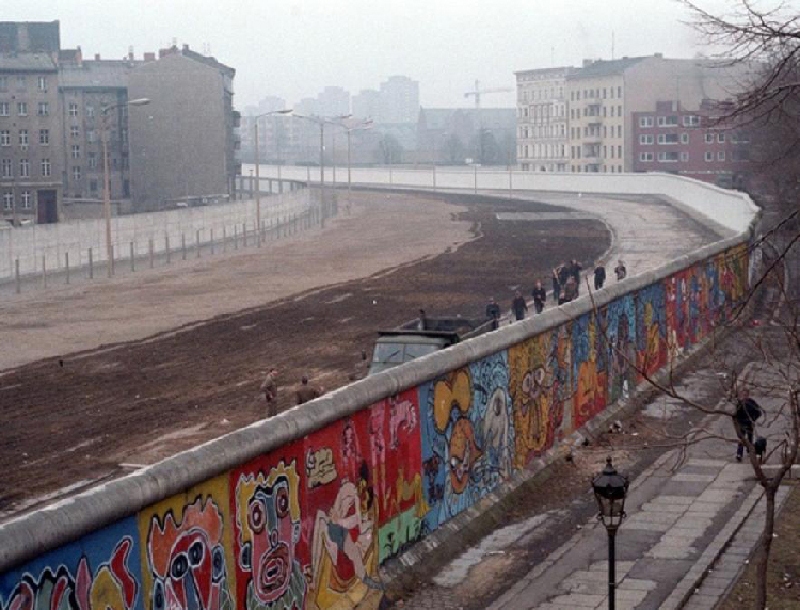 Berlin Wall graffiti on the west side. Image via Wikipedia

One of the common places in many texts that deal with the evolution of Berlin street art scene is that it began on the west side of the Berlin Wall. The initial barbed wire fence introduced in the 1960s grew into a sophisticated security system of concrete walls, electric fences and guard towers, separating the East side from the West, embodying all the anxieties of the Cold War in the most concrete of senses. During the eighties, the wall was reconstructed and raised 14 feet tall, which made it a perfect message board, a blank canvas for artists and dissatisfied individuals of West Berlin to express their opinions and affiliations. As many commentators note, the initial impulse to paint on the Wall came not from the Berliners, but early settlers in American-occupied sector consisting of draft resisters, anarchist punks, and Turkish migrants, who used the wall to express their thoughts and beliefs. French artist Thierry Noir who was at the time living in one of the squats near the Berlin Wall, is claimed to be one of the first artists to paint on the Wall and his initiative was followed by many acclaimed and unknown art practitioners, as well as multitude of visitors.

The Berlin Wall also became the meeting point for the first generation of graffiti writers, some of them being the children of US servicemen, who brought the booming spirit of their local graffiti culture to West Berlin. It is one of the main reasons why initial graffiti writings were heavily influenced by the New York graffiti scene. As the paintings on the west side of the Wall flourished, the east side was left with the blank, sterile wall surface, where free artistic expression on the one side became a marker of social and cultural differences of separate societies. All this changed after the fall of Berlin Wall in 1989, when the city as a whole became playground for artists of both sides and street art scene thrived in the atmosphere of newly found freedom. 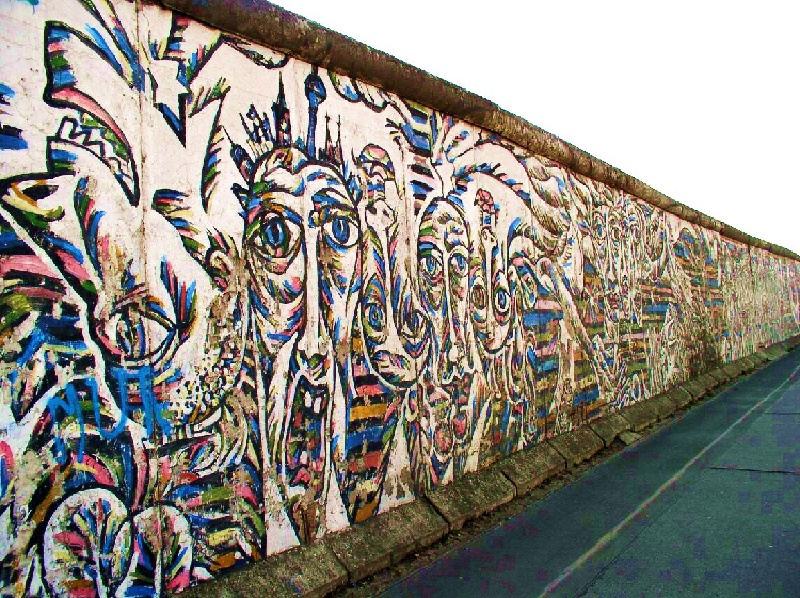 East Side Gallery. Image via Wikipedia

East Side Gallery – A Freedom Memorial

The street art movement continued to develop after the Wall collapsed, with artists marching into Eastern neighborhoods like Mitte, Friedrichshain, Prenzlauer Berg and turning the gray areas of the city into vibrant art districts. Parallel to the spontaneous forms of artistic expression, which started developing in the city, one of the most significant mural projects was initiated on the remains of the Wall construction. In 1990, artists from all over the world were invited to paint on the Wall’s empty east side, celebrating reunification and expressing hopes for brighter future. The remains of the Wall, with over one hundred murals became known as the East Side Gallery, one of the largest open-air galleries in the world and the biggest memorial to the world piece. Not to mention one of the most important tourist attractions in Berlin. The preservation and restoration of East Side murals defaced by illicit artworks and graffiti tags also raised some important questions about the nature of street art, its legality and cultural significance, questions that came to define Berlin’s street art scene in the years to come. 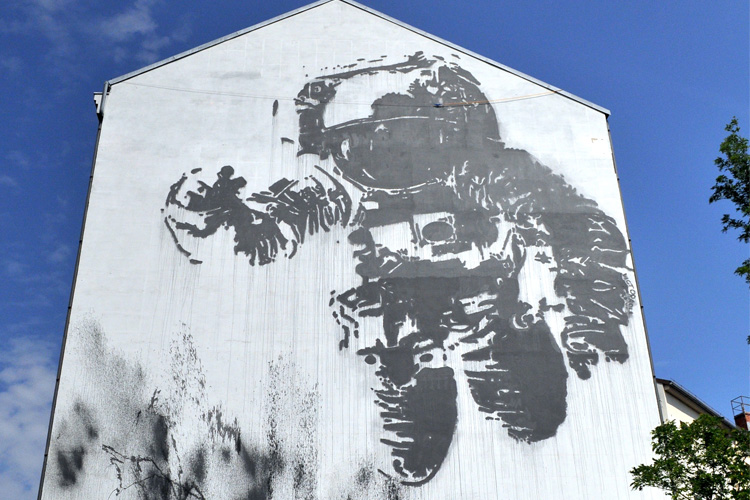 In street art community, Berlin is often referred to as “the graffiti Mecca”, “street art capital” and “most bombed city in Europe.” Considering that graffiti are illegal in Berlin, one has to ask how did the city earn its title, which again takes us back to the social and cultural contextualization. The rich and versatile street art scene in Berlin is a result of various paradoxes that followed the evolution of the movement. Graffiti and street art had an essential role in shaping the identity of the city and when UNESCO proclaimed Berlin the City of Design in 2006, there were no doubts that vibrant street art scene partially influenced the decision. On the one hand, illicit street art is seen as vandalism by the authorities, on the other the perception of Berlin as “the graffiti Mecca” attracts millions of tourists a year, contributing to the city’s debt-riddled economy. Illegal street art is punishable by law, yet the city officials weren’t particularly eager in their efforts to address the issue or initiate graffiti removal projects. This all lead to the paradoxical situation in which street art and graffiti thrived, using the gray legal area as their foundation. In addition, in the time of globally shared enthusiasm regarding street and urban art, as byproduct came the effort to turn the city’s street art scene into the industry and institutionalize what was once known as a free-spirited movement. 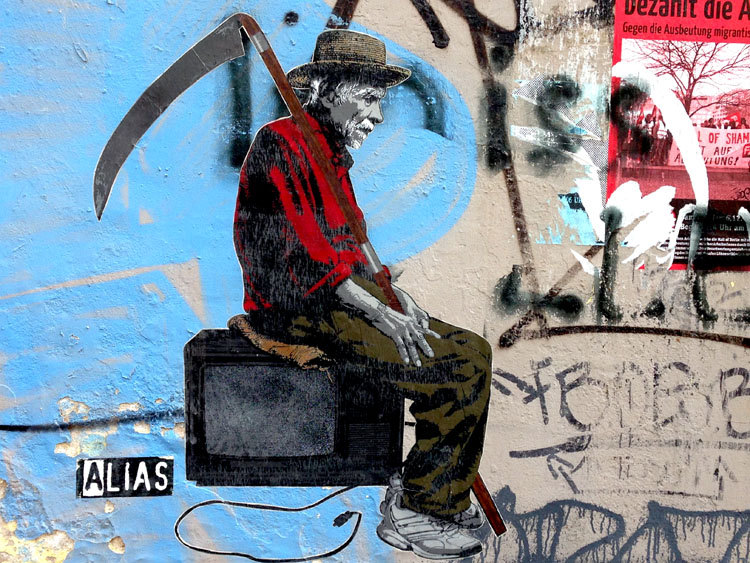 While in the eighties graffiti and wall painting developed in reaction to the sociopolitical atmosphere of the divided city, the years after the fall of the Wall were followed by the new direction. For street artists and graffiti writers, new mission was to reclaim the public spaces and the result was a plethora of versatile street art expressions. From numerous graffiti crews to prolific local artists working in various techniques from stencils to paste-ups, protagonists of street art scene in Berlin participated in the making of a truly diversified and exciting movement. The dynamic local scene and perception of Berlin as a city that embraces street art also attracted a number of international artists who were looking for that sense of freedom of working in the streets that wasn’t found elsewhere.

Until the 2000s, which triggered a street art craze on a global level, much of the work on Berlin streets was developing on a small-scale through spontaneous interventions. Besides proliferation of graffiti tagging, street art evolved through its own dynamics giving birth to a generation of prolific artists like Alias, XOOOOX, Mein Lieber Prost and El Bocho, who developed a unique set of recognizable characters, communicating with local audiences by remaining constantly in the public eye. After the 2000s, the city saw an increasing number of large-scale mural projects, embracing what became the most sought after trend in street and urban art. Although it could be argued that commissioned mural works don’t fall into the category of traditional street art tendencies, these large-scale projects added a new layer to what already was a prosperous street art scene.

With the abundance of graffiti writings, versatile street art expressions and monumental mural works made by many celebrated local and international artists, Berlin truly is a unique city that leaves no street art enthusiast indifferent. The city walls tell the story of Berlin’s rich cultural heritage of public art while also displaying new and innovative advancements. In the end, whether we decide to accept the title of the “street art capital” of not, the fact remains that Berlin is still one of the essential references when it comes to graffiti and street art in Europe and on a worldwide scale. If you’re interested in experiencing the city’s rich street art scene and gaining comprehensive insight into its evolution and stories behind the works, you should definitely consider taking a street art tour with Berlin Street Art.