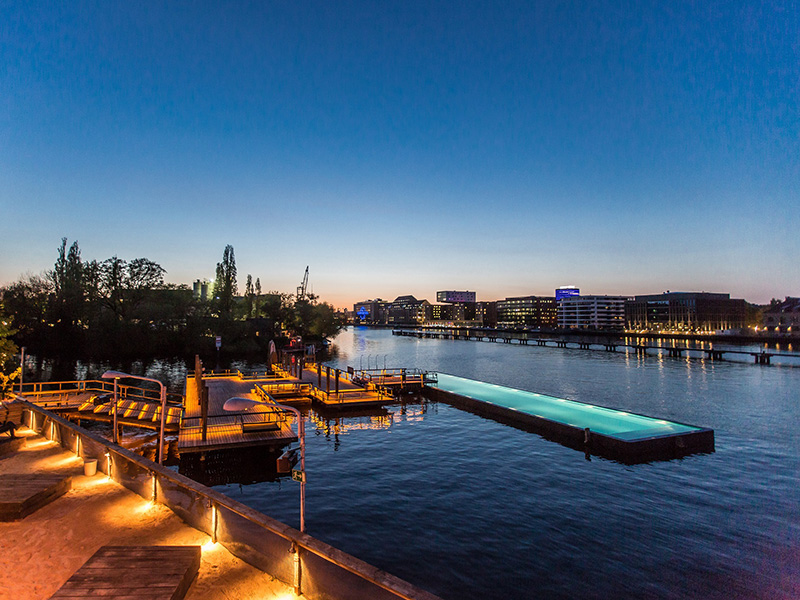 That the German capital is a city with plenty of places to see and things to do is a long-established fact – historic landmarks, the Wall, the Museum Island, bike and boat tours, you name it. But what to do in Berlin when you’re not exactly just another tourist who just wants a selfie in front of the Brandenburg gate or the Reichtag? What if you’re someone who likes to travel and explore the best things that are not featured in a guide and visit those gems that are hidden in plain sight just waiting to be discovered? Berlin seems to be just the right city for such a journey – after all, it’s not called “the capital of cool” for nothing. As such, it is abundant with funky, offbeat, alternative treasures, places, people and events of the subculture it so carefully created and developed over the years. If you’re a fan of urban vibe that is also described as weird, quirky, unique, bizarre, wacky or simply hipster, our suggestions on what to do in Berlin will definitely come in handy. 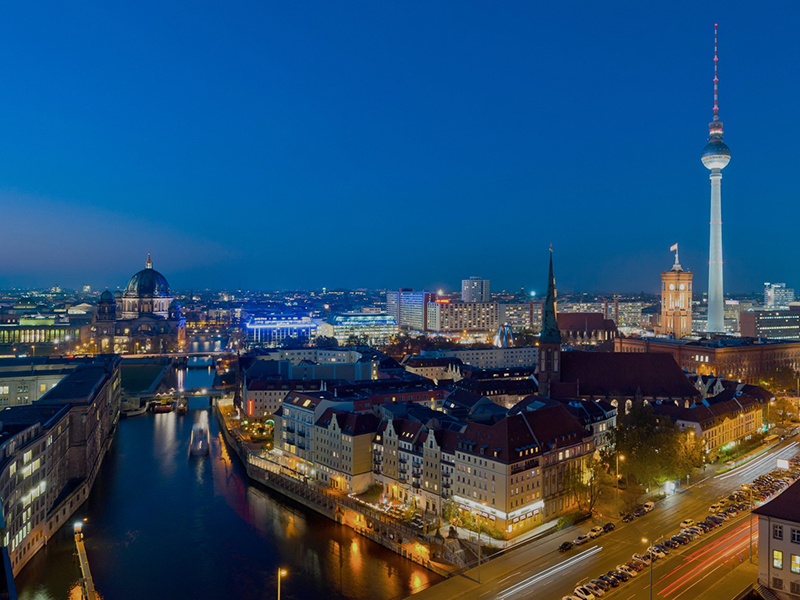 Where are the hidden gems of Berlin?

Alternative Things to Do in the City of Berlin

Germany’s capital Berlin is a remarkable city – a mecca of artists, a sanctuary of bohemians, a hotspot for creatives coming in from every corner of Europe and the world. With a rich and turbulent history, it is still young in spirit, oozing with trendsetters, one-of-a-kind fashion style, cutting-edge art and constant innovation. The truth is that Berlin catches you by surprise, as it slowly unveils its possibilities and opportunities after cunningly saving them for last, and you can’t help but fall in love and plan your return before you even leave. Let’s say you have no interest in being an ordinary tourist, or that you’ve already done all the usual sightseeing. Are you now ready to experience something different? 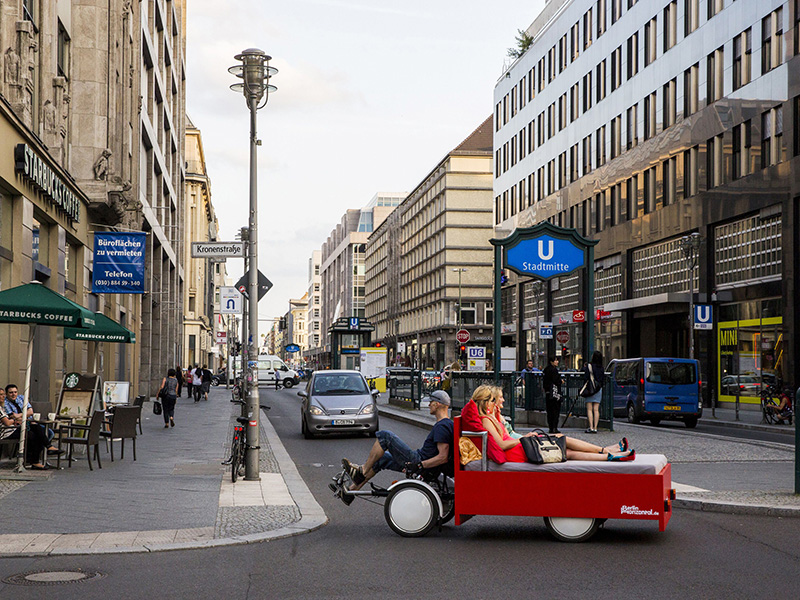 Berlin offers many unusual things you can experience during your visit

If you’ve somehow missed that detail, bear is the official mascot of the city of Berlin, and the funny thing is that you can actually meet her in person! Her name is Schnute and she lives in a small, open-air area called Bärenzwinger, located inside the Köllnischer Park, the city’s historical centre. Until recently, she was accompanied by her daughter Maxi, who died in 2013. The Berliners are obsessed with bears – they’ve been on their city’s seal since 1280, and since 1937, they’ve been the official citizens of the capital. The good news is that these bears are very looked after, by an official association dedicated to their well-being, called Bärenfreunde Berlin (Friends of the Bears in Berlin).

Stay the Night in an Indoor Caravan

Don’t know where to stay? Here’s something you’ve probably never seen before. Located in Berlin’s trendy Neukölln is the Hüttenpalast, an old vacuum cleaner factory that is now turned into an indoor camping field, with actual trailers put at your disposal. There, you can find three vintage caravans and three cozy log cabins available for a one-night stay; or, you can choose invidivual, one-of-a-kind hotel rooms. No matter the weather outside, inside the vast factory hall of the Hüttenpalast the atmosphere is always perfect for camping, right in the middle of the city itself. Local hostesses Silke Lorenzen and Sarah Vollmer have been welcoming guests there since 2010 and it seems they will continue to do so for quite a while, for there is always someone interested in having an unforgettable retro experience.

A caravan inside the Hüttenpalast

Tour the City of Berlin in a Trabant

Sure, you can tour Berlin by boat or take a bike, but doesn’t something called Trabi Safari sound much more interesting? In fact, it is a tour of Berlin’s East side inside the GDR’s legendary car – Trabant. You can either drive this nearly-extinct automobile (and get your very own souvenir Trabant driving license afterwards) or enjoy the ride from the passengers’ seat for approximately 75 minutes, and have a different look at the popular Berlin sights such as Potsdamer Platz, the Brandenburg Gate, the Berlin Cathedral, the TV Tower, the East Side Gallery and Checkpoint Charlie. All cars are exactly the same, except they’re called differently: Erich, Willi, Horst, Egon… And while there, why not also pay a visit to to the Trabi Museum at Trabi World? 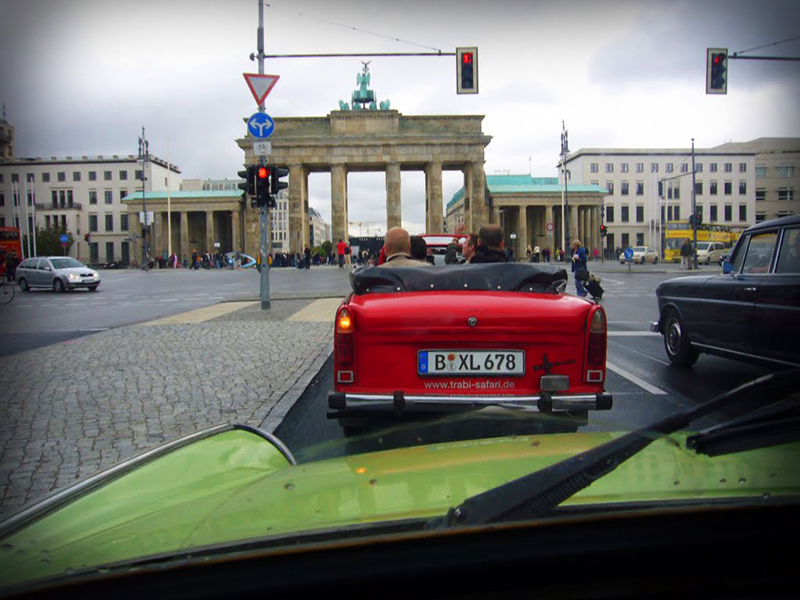 Dinner and a Show at Zagreus Projekt

The Zagreus Projekt in Berlin is not your typical art gallery, although the fact that it is an arts space could already be reason enough to visit. But wait, it gets better! A special gourmet dinner is a part of any exhibition concept. Every two months, the owner of Zagreus Projekt, Ulrich Krauss, invites an artist to create a site-specific installation inside the gallery space, located in a classic late 19th century Berlin townhouse. Together, they collaborate on a spectacular menu that is inspired by the artwork. The food from it gets served several times a week to a small group of diners at a communal table surrounded by the artworks. You can book your place by calling the gallery and check out what’s on the menu – and the walls – the month you’re there! 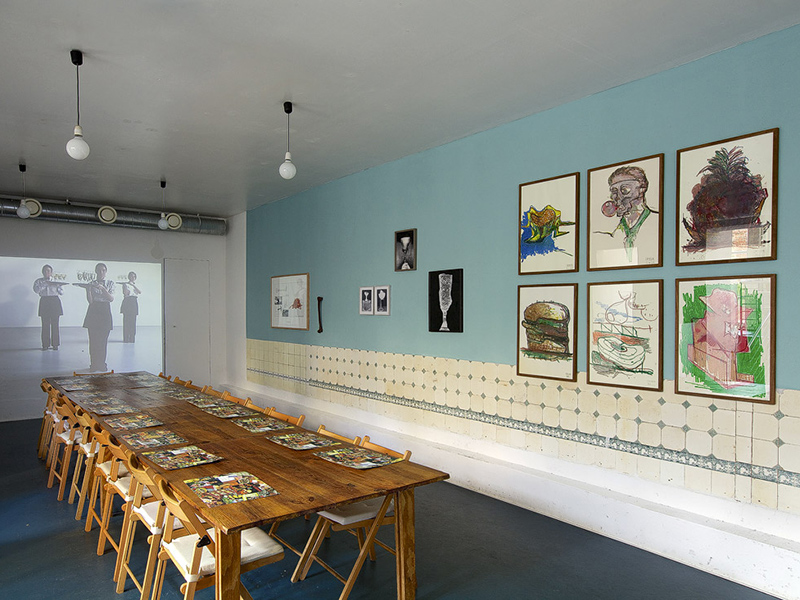 Berlin is not just about things you can do, but also places to see and enjoy without necessarily doing anything – other than simply relaxing or walking around. Covering a variety of interests and coming from different periods of the city’s remarkable history, these places to see and experience are strongly rooted in Berlin’s culture, urban life and identity, to the point where there is no way you can find them in any other metropolis in the world. But be warned – all these attractions off the beaten path could make you stay in the capital much longer than you expected. 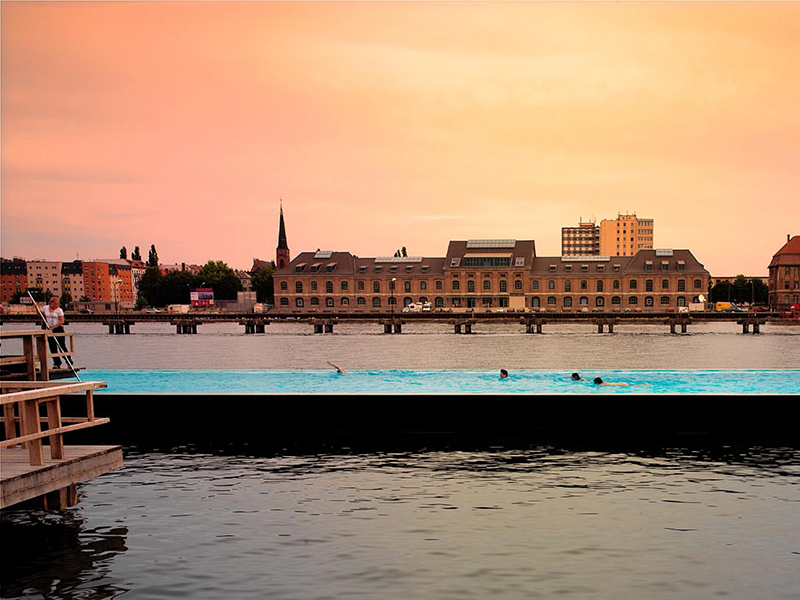 It is a swimming pool, but definitely not that kind you expect. Badeschiff translates to “bathing ship”, which might give you an idea of what this interesting project is. Part an artwork and part a contemporary solution to living in a polluted urban environment, Badeschiff was conceived by local artist Susanne Lorenz and it now floats on the River Spree in Berlin. It is made out of an old river cargo container and, when it is filled with water during summer, it makes up a little oasis at eye-level with the river itself, where you can dip in and enjoy the music played by DJs and get a drink from the open bar. In winter, however, Badeschiff becomes an indoor health complex thanks to the designs of architect Gil Wilk, who covered the pool with three translucent shells. As a sanctuary from the harsh Berlin winter, it offers two saunas (which requires full nudity, by the way), lounging area and heated pool. 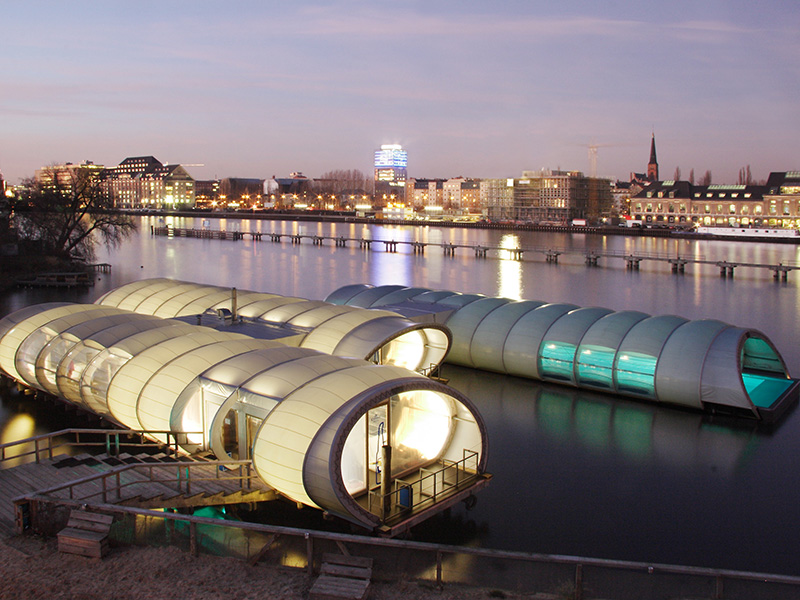 A fan of UFOs? What if I told you there’s one you can take a look at? All you have to do is go to Berlin’s Treptow-Köpenick area, and this vintage 1969 structure will blow your mind. It is one of the world’s 96 Futuro Houses, which were set out to be a great success in the late 1960s. Designed by Finnish architect Matti Suuronen, these mass-produced living complexes came during the rise of technology and it was widely believed that they would become an international phenomenon. The truth was that they did, for a brief moment, as they could be delivered to your door, but it was soon clear that not everyone could afford one, so they went out of fashion. The on a that could still be found in the city is currently a private house, but you can definitely check it out and judge its polyester and fibreglass nature for yourself. 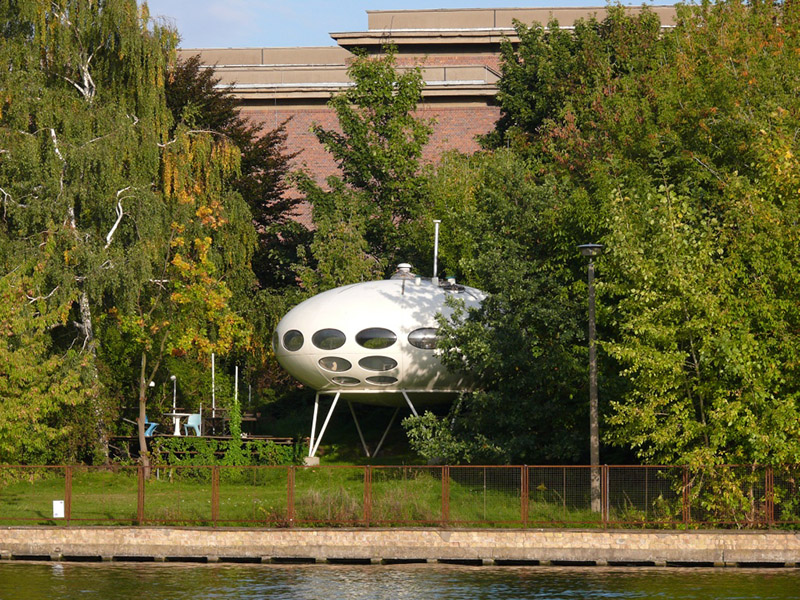 The legendary Kunsthaus Tacheles is one of Berlin’s most interesting landmarks of culture, although that’s not exactly a conclusion you would come to at first glance. Its building, covered in graffiti, is not in the best of shape, yet it has always been the beloved home of many artists throughout the 20th century and counting. During its never-boring history, it served as a department store, a Nazi prison, With a space of 9000 square meters, Kunsthaus Tacheles housed numerous modern art sculptures, a cinema, a theater, a café, studios and workshops, a night club and a beer garden, which is still partially open to public. In 2014, the facility was purchased by a financial services firm, which plans a massive renovation. 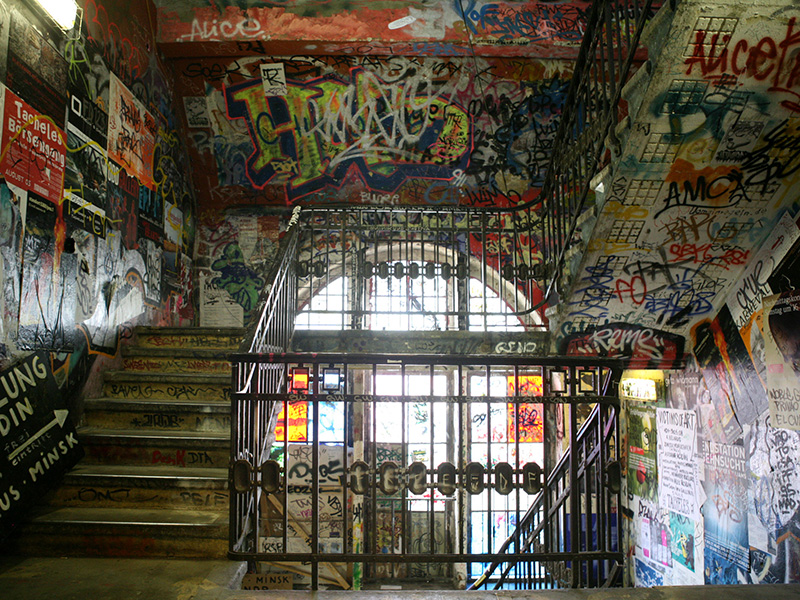 Graffiti inside Kunsthaus Tacheles in 2012

Other Berlin city parks like Tiergarten and Mauerpark offer spacious green landscape and a flea market you shouldn’t miss. Tempelhof is a former airport now serving as the ultimate heaven for leisure and recreation activities. But Spreepark? It is a dinosaur-themed amusement park which no longer exists. For the last fifteen years, it has been abandoned and it sure does look like it, with toppled dinosaur statues, giant rusty Ferris Wheel and derailed go-carts everywhere. Formerly known as Kulturpark Plänterwald, it was THE amusement park of the GDR, attracting some 1.7 million visitors a year until the fall of the Berlin Wall in 1989. Throughout the 1990s it was unsuccessfully managed by Norbert Witte and it was permanently closed in 2002. For a short period of times, there were guided tours, but those are no longer available, and in 2014, a large part of the Spreepark was destroyed in a fire. What you can do, however, is walk the promenade going around it and still get a glimpse of the decay inside. 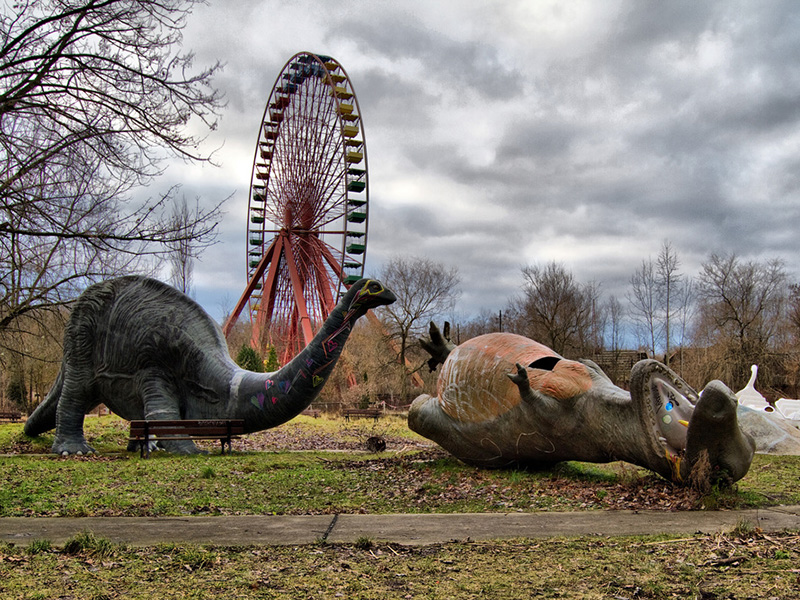 Also Worth Your Attention…

Naturally, in a place as vibrant as Berlin, there is always something new to discover. For instance, did you there is an entire depot dedicated to absinth? Yes, that magical drink that was illegal for decades and that is now available again in Germany. If you’re up for something less.. fairy, make sure you pay a visit to the Tadschikische Teestube, or the Tajikistan Tearoom, a little piece of Middle East heaven serving delicate teas and wonders of the Russian cuisine. When it comes to clubs, there are simply so many open any given day, but we’d like to highlight Kraftwerk (yes, like the band), an abandoned industrial power plant turned nightclub and a place for art installations, events and gigs of all sorts. There is also the AquaDom, also known as the fishtanks elevator, the Kunstquartier Bethanien open-air cinema, the peacock island…

Of course, the Berlin Memorial, the Brandenburg Gate, tours of history and all the other Berlin landmarks are still going be there, if you decide to pay them a visit. If you don’t know where to stay, we suggest our lists of the best hotels in Berlin Kreuzberg or Mitte neighbourhoods we wrote about just recently here at Berlin Street Art, or the very best restaurants you can find in the centre. If you’re a bit more artistic than that, check out the amazing art hotels.